Hanuman Jayanti is celebrated all over the world by devotees of this son of wind-God (pavan putra) to commemorate his birth. Hanuman, born to devi Anjani and vanar-raj Kesari, is said to be the greatest devotee (bhakt) of Lord Ram. Hanuman Jayanti falls on the Purnima of the Chaitra month of the Hindu calendar.

Devotees throng the temples in droves to offer prayers to and seek blessings from Lord Hanuman on this day and chant the Hanuman Chalisa, Sundar Kaand and verses from the scriptures of Ramayana. Hanuman is the only God who is said to be present in the Kaliyug (the present age) to protect his devotees against all evil.

In the scriptures, he is described as possessing herculean qualities and one who shouldered the prime responsibility in helping Lord Ram in the battle against Ravana and freeing mother Sita from his captivity. He is the symbol of strength and energy. Some of his exceptional strengths are his abilities to  assume any form at will, move mountains (he saved Lakshmana from the jaws of death by carrying a whole mountain from the Himalayas that had the life-saving herbs on his shoulder), dart through the air, seize the clouds and rival Garuda in swiftness of flight.

He is also believed to be an incarnation (ansha-avatar) of Lord Shiva and is fondly called by many names like Mahavira, Bajrangbali, Maruti, Anjaneya, and Pavanputra. It is said that Lord Hanuman was known to be of the color of vermillion, which is why he is likened in an orange avatar and offered boondi, besan or motichoor laddoo.

He is seen as the embodiment of devotion and loyalty and is one of the rare Hindu gods who has taken a vow of celibacy. Hanuman is legendary for his unflinching devotion and loyalty for Lord Ram. Some also call him the ideal karma yogi for his fearless, selfless service, humility, and devotion for his Lord Ram. 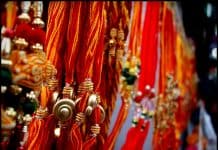 Raksha Bandhan – the celebration of a bond

Varalakshmi Vratam – the shower of boons 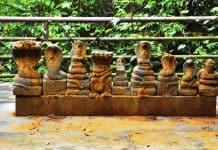