Dwarka, one of the char (four) dhams, is a must on every Hindu pilgrim’s itinerary. It has been referred to throughout history as “Mokshapuri”, where the soul attains salvation. It is also known as the kingdom of Lord Krishna, where he came to live after slaying his evil uncle Kansa. “Dwarka” comes from “Swarg ka Dwar”, which literally means the gateway to heaven.

I fell in love with Dwarka the first time I visited it a few years ago. Our family had kept a Bhagvat Katha Saptah at Dwarka and we stayed in a dharmshala (religious rest house). There are many hotels in Dwarka where travelers and tourists can comfortably stay while they take darshan and blessings at ancient temples nearby. Since we wanted to absorb the full experience and essence of the saptah, we stayed at the dharmshala where it was held.

With the commencement of our katha saptah started our journey and voyage of this ancient city, known and mentioned in our scriptures for the past 5,000 years. Every morning, I woke up at 4 am to visit the Dwarkadheesh temple, which is said to be built during the time of Lord Krishna (around 5,000 years ago), for the morning aarti prayers. At the first rays of sunlight peeping through the dark overcast skies, we would walk past the river Gomti, drinking in the morning glory of bhajans, temple bells and prabhat aartis coming from the many temples lining the Gomti ghat. Dwarkadheesh temple, also known as Jagat Mandir, has two entrances: the one facing the river Gomti is called the Swarg Dwara (or the gateway to heaven) and the other entrance is called the Moksha Dwara (the door to salvation). There are 56 steps that lead up to the temple and the local legend goes that anyone who climbs those 56 steps to visit the temple will attain salvation.

The dhwaja (the flag) on top of Dwarkadheesh Mandir carries the symbols of the sun and moon and is changed five times daily. As one enters the temple, one is mesmerized by its sheer grandeur and feels almost transported back in time. The temple is a five-story structure built on seventy two structures and, according to local account, it has survived the bombing during the Indo-Pak war (sand bags were laid around the temple during the war for its safety and it was not defaced). The early morning aarti was the most enthralling experience of my life as a Hindu devotee. The aartis mix with the sound of bells coming from all directions, which in turn blend with the sounds of bhajans and chants from devotees and the whole aura in the temple in the morning is one of a grand celebration – the celebration of life and the celebration of prayer and bhakti, creating an effect on me that is difficult to describe in words.

As our days progressed, we started visiting other places around Dwarka, starting with the Nageshwar jyotirling, which is one of the twelve jyotirlings where Lord Shiva appeared in the form of a lingam. According to Hindu scriptures, reciting the names of the 12 jyotirlingas and visiting them eliminate sins and help devotees become chaste. Nageshwar temple has a huge idol of Lord Shiva, which can be seen from a distance as one approaches the temple.

Dwarka has other interesting spots for spiritual travelers and pilgrims as well. Some of the other places for visiting are the Rukmini temple, gopi talab (lake), Bet Dwarka, Paanch Kuwa, Gayatri temple, Bhadkeshwar Mahadev temple and the sunset point.

Gopi talab was another interesting place we visited. It is said that Lord Krishna had slayed a demon known as Bhaumasura and released 16,000 princesses, who were forcefully locked inside the demon’s palace at this site. We also picked up gopi chandan or gopi sandal, which originates from this place; devotees apply tilaks with this chandan on their foreheads and bodies. We visited the Rukmini temple, which is also rich in folklore and legends.

On our way back, we also stopped over at the Somnath temple, another one of the 12 jyotirlingas. As our Bhagvat Saptah concluded, so did our voyage and exploration of this beautiful city of Dwarka on the western coast of India, overlooking the Arabian Sea. 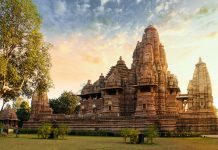 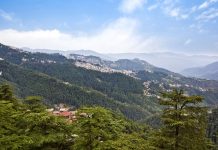 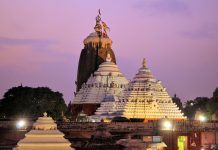 India’s evergreen city BECKONS: a journey to the far south