West Bengal is not just Kolkata and the Victoria Memorial. The virgin territories of Dooars, the untouched mangrove forests of Sundarbans, the sylvan surroundings of Santiniketan are only some of the brilliant experiences that have made the state a vacationer’s delight. For centuries, Kolkata – the second largest city – had set off on the track for the rest of the country to trail in just about every phase of life. Bengalis are intelligent folks, evident in their ability to come up with Nobel laureates at regular intervals. Its metro railway boasts of cleaner and more enhanced running than tubes in London or Paris. Having spent my childhood days in Calcutta – it was so-called then – the city holds a special corner in my heart!

Kolkata is often likened to a laidback city full of people and poverty. But to me, it is one of those Indian cities that pulsate with an energetic life force. The city spreads along the Hooghly river, which divides it from Howrah situated on the west bank. Going back in history, Kolkata was founded by Job Charmock, who was in charge of the East India Company’s warehouse in Hooghly. Unforgettable landmarks that make me nostalgic are Chowringhee Lane, Alipore, New Market, Loreto House, The Grand Hotel, and the Howrah Bridges – there are two bridges now. The old bridge is a cantilevered one built of steel and it is the busiest in the world. Victoria Memorial is the most impressive milestone; it is a magnificent monument opposite the Maidan. Worth visiting is the Triveni, which is a confluence of three rivers – Padma, Jolangi and Hooghly. Pujas are performed on a grand scale with pandals erected in building complexes. Bengalis observe the Durga puja as a five-day annual autumnal celebration in honor of Goddess Durga. Kali puja is observed and worshipped on the day the rest of India worships Lakshmi on Diwali. 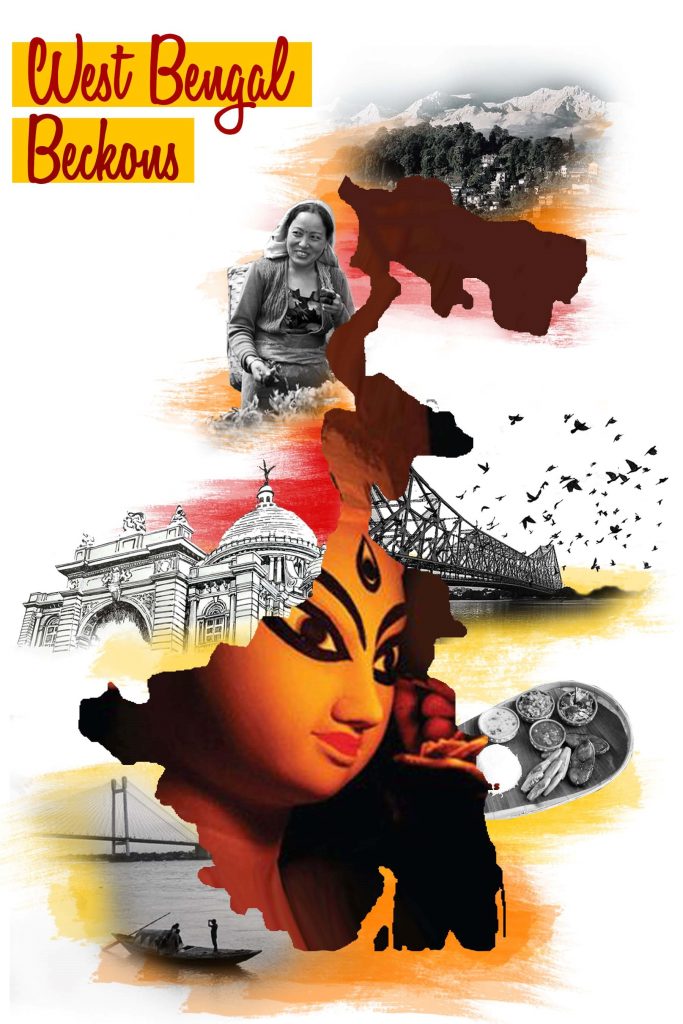 The Chinese first came to the city in the middle of the eighteenth century, bringing along their exotic culture, customs, and a delicious cuisine. I recall the Chinese delights served at Peiping and Chung Wah (they do not exist anymore). Although the interiors were not fancy, food was served in real Chinese porcelain. Cuisine was Hakka, Cantonese, or Szechwan, each categorized by unique tastes and zests. Unlike other Indian cities where Chinese cuisine is more of a ritzy affair, in Kolkata, it has always been a middle-class matter. The number of Chinese people living in Kolkata may have declined but their gastronomic legacy lives on.

Regular Bengali food lays emphasis on fish, vegetables, and lentils, served with rice as a staple diet. Subtle flavors of Shorshe Ilish (Hilsa in mustard sauce), Bhapa (steamed fish) or Macher Jhol are some of the favorites of the natives. Luchi is a kind of puri and bhaja & singara top the snacks. Jhalmuri is another popular in-between meal crunchy food. My personal favorites are motorshuti chenar chop, alu poshto and radha ballobi.

Skirting the Bay of Bengal, lie the Sundarbans – home to the famed royal Bengal tigers. Influence of Muslim architecture in the palaces of Murshidabad Nawabs and my mother’s silk saris from this place make for heirloom items; exquisite craftsmanship can be seen in the famous terracotta temples of Kalna and Bishnupur, which are a must-see. Take a heritage cruise down the Ganga. Even the usual circuit of Kolkata, Dakshineswar Temple on the bank of the Hooghly river has, along with the presiding deity Bhavatarini Kali, 12 shrines dedicated to Shiva, along the river front.  Belur Math – the foundation of Ramakrishna Mission – houses a room where Swami Vivekananda lived. An absolute shoppers’ haven, bargains are in plenty here. Take your pick of your best Tanetar sari and Bangla mishti.

Santiniketan – the seat of learning and meditation – was conceptualized and introduced as an ashram by Maharishi Debendranath Tagore. Over the years, it shot to international fame through open-air school and later the university founded by Maharshi’s eminent son and distinguished poet Rabindranath Tagore. And I have heard that if you manage to make that short spree to Tagore’s Santiniketan, you might just meet up with another Nobel laureate Amartya Sen, cycling down the road.

A visit during Poush mela, from 22 to 23 December, is recommended when local crafts and folk artists make it a welcome getaway.  Three days of the Poush mela are observed through prayers and cultural meets; a fair is held where local crafts are exhibited and people bring their merchandises to sell, folk artists perform before a crowd, and where urban and rural folk interact without prejudice. ‘Bichitra’, the museum dedicated to Tagore, is filled with Tagore memorabilia. Mud-built houses where Tagore lived and the mural and sculptures at Kala Bhavan Santiniketan are tourist attractions.

Just like every state has its own hill station tucked away, Darjeeling – in the lap of the mighty Himalayas – is West Bengal’s hilly pride. It lies in the shade of Mt. Kangchenjunga. The Mall is the heart of this town from where it is possible to get sweeping views of Himalayan snow peaks, besides narrow lanes and by lanes that lead to several tourist attractions from here. A walk down Chowrasta and you get to browse through its shop, laden with woolen garments, curios, brightly-painted ‘thangkas’ (paintings on scroll). Other unmissable spots are the Tiger Hill, Sencha Lake, and Ghoom Monastery. A coffee-drinker like me was introduced to Darjeeling Tea – also referred to fondly by connoisseurs as ‘Champagne of Teas’. The ambient climate and soil add an extraordinary upshot to the aroma, making ‘China Hybrid’ plant unique.

The tradition of quilting and embroidering old fabric to make exquisite Kanthas is handed down from generations in Bengal. With the gentle landscape as the muse, as well as from the beauty and bounty of nature, the folks of Bengal have, for centuries, fashioned diverse artistic crafts. Out of these, Kantha is as charming as it is functional. And where I am concerned, my heart still belongs to Kolkata!

The old-world charm of Victoria Memorial Garden, Alipore and Howrah Bridge, the aura of Grand Hotel and New Market, relics of trams and hand-pulled rickshaws – the tag of laidback notwithstanding, and the arty & poetic Bongs evoke a feeling that BECKONS you to decode the enigma of West Bengal!

London – an exquisite mix of ancient and modern