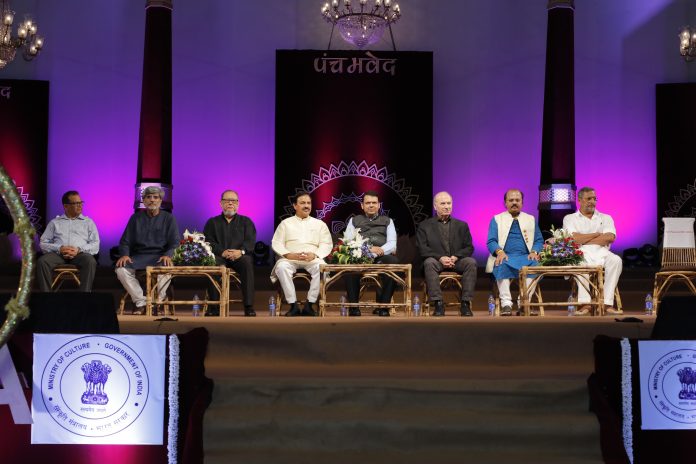 Mumbai: After a glorious run of 51 days across 17 Indian cities, the historic event – the 8th Theatre Olympics – drew to a colorful close here last night.

Many luminaries descended to grace the momentous occasion in the life of Indian theatre and cultural groups. The chief minister of Maharashtra, Devendra Fadnavis, was the chief guest at the ceremony. Minister of state, culture ministry, Dr. Mahesh Sharma, and eminent theatre and film personality Nana Patekar were guests of honor.

“We get many chances to show our strength and potential but the 8th Theatre Olympics has given us an unprecedented opportunity to show the power of our culture. 8th Theatre Olympics could not have been possible without the inspirational support of Dr. Mahesh Sharma, our beloved and visionary culture minister, government of India. NSD is proud to have organized an event that has shown the cultural might of India, a vision shown by our honorable Prime Minister Narendra Modi,” NSD director Professor Kendre said.

“I wish the Indian theatre, with support from Indian government, would dominate the world. The 9th Theatre Olympics will be jointly organized by Russia and Japan,” Theodoros Terzopoulos said in his address.

“I am really happy that Professor Waman Kendre has taken theatre to another level. I appreciate your work and thanks that you kept theatre alive, thanks for being associated with theatre for so long in all possible manners,” Nana Patekar said, acknowledging Professor Kendre’s contribution to theatre.

National School of Drama director Professor Waman Kendre“Our rich heritage and culture is the reason that India stands united today despite the diversity. My friends, life is like theatre. Like life, it goes on; it is only time, settings and people that change. It is true for this city Mumbai, which goes on in all situations. Entire nation should be woven in the cultural fabric to create a united India. Through Theatre Olympics, we have commenced our journey to reach that goal,” minister of state, culture ministry, Dr. Mahesh Sharma, said.

“I thank Dr Mahesh Sharma and NSD to have selected Mumbai to organize the final phase of Theatre Olympics. Maharashtra is known as the birthplace of cinema but actually much before that the state has been the centre of theatrical activities. Our theatre will flourish from generation to generation. Without even the technical aspects of movies, theatre is able to create the effect through acting, and hence our theatre will never die,” chief minister Devendra Fadnavis said in his speech.

“Theatre is a place where we can reflect all emotions and sentiments of society. Politics also has a bit of theatre in this. If we do our role well, people give us support and when we fail to play our role, they reject us. This I see a parallel between the theatre and politics,” he added.

“We thank Dr. Mahesh Sharma for taking this initiative and taking Theatre Olympics to another level. I am grateful to students and faculty of NSD who have supported the event throughout. Also, I thank all the coordinators in the 17 cities who have worked very hard to make this a success,” acting chairman, National School of Drama Society, Dr. Arjun Deo Charan, said.

The 8th Theatre Olympics, which comes as a huge encouragement to Indian theatre and cultural organizations, was inaugurated by the Vice President of India, M Venkaiah Naidu, on 17 February 2018 at the majestic Red Fort in New Delhi. This edition of Theatre Olympics brought together around 25,000 artists under the theme “Flag of Friendship”. The event witnessed 450 shows from more than 30 countries performed across 17 cities such as Agartala, Ahmedabad, Bengaluru, Bhopal, Bhubaneswar, Chandigarh, Chennai, Guwahati, Imphal, Jaipur, Jammu, Kolkata, Mumbai, New Delhi, Patna, Thiruvananthapuram, and Varanasi during the festival.

Hit the right note with these YouTube music channels

Ma Shantadurga palkhi in all its glory