The month of April-May (‘Medom’ in Malayalam) is the season of ‘poorams’ (festivals) in Kerala. For culture enthusiasts, this is the best time to visit Thrissur, the temple town and cultural capital of the state when it gets ready to unfurl the major temple festival called Thrissur Pooram.

Pooram was initiated in 1798 through a royal announcement made by the then Raja of Kochi – Rama Varma. Nearly 100 circumspectly chosen gold-caparisoned elephants are paraded for the festival. Special menu of Kerala sadhya is served on banana leaves with 22 different types of curries and condiments.

Representing the advent of Pooram, during the end of April, creatively-planned multi-tier welcome archways, banners, buntings and decorations in myriad shades and forms emerge in strategic locations in this town. As the leading temple festival in Kerala unfolds, thousands throng the Thekkinkadu Maidan to soak in its magnificence and grandeur. The remarkable Vadakkumnathan Temple complex and Thekkinkadu Maidan (lawn) are the lifelines of Thirussur denizens and this is the ideal season to show off the glory and splendor of the temples and tuskers.

Paramekkavu and Thiruvambadi temples conduct the festival and spontaneously participate in processions and elephants. Collective get-up, drumming, fireworks and moreover tusk-length of elephants too play an important part. The temples compete with each other to cavalcade the most regal and commanding pachyderms for the occasion.

Deities of both the temples leave for the Thekkinkadu Maidan in the wee hours of the morning and the ceremony lasts for more than a day. Starting from each temple, a mammoth and flamboyant procession is led by a fleet of 15 elephants to pay obeisance to Lord Vadakkumnathan (Shiva). The tuskers adorned with glittering gold nettipattams (the traditional caparison used to decorate elephants) and the three-men mahouts, flapping peacock plume fans in synchronization with the percussion bands, is a sight to behold! The most stately and imposing tusker among the assemblage carries the ‘thidambu’ idol. As soon as both groups come head on in front of Vadakkumnathan temple, the competition is thrown open.

Temples from the vicinity also participate in the festivities and come in smaller processions. You can catch the revelers swing into a hypnotic mood as the unsurpassed temple art and culture of God’s Own Country with its brilliant ‘Ilanjithara Melam’ will jolt you out of your reverie. The reverberation of ancient Panchavadyam (five instruments – conch, trumpet, cymbals, finger-drum, stick-drum) and Pandi Melam (unique percussion of Kerala) stir up a crescendo as the obedient elephants stand spellbound. Steered by expert old-timers, over 200 percussionists and hooters unbridle their talent.

Parasols of numerous hues and patterns, swapped in quick sequences from above elephants offer a visual treat. This spectacular display of changing umbrellas is called ‘Kudamattom’ and is the much-awaited finale of Pooram.  Around 70 to 80 sets of umbrellas will be showcased by each group. A ceremonial farewell closes the Pooram on both deities next day noon. And it is back to routine life in the sacred town of Thrissur till the next pooram! 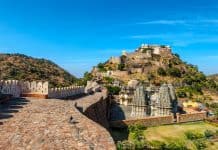 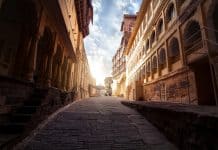 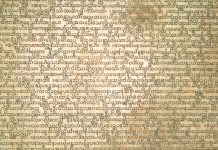