With an astounding length of 3,229 meters, Belum caves are the second longest caves found in the Indian sub-continent and the largest caves open for public viewing. Formed entirely from intriguing natural phenomenon, these caves are given the status of ‘Monument of National Importance’ and rightfully so.

Scientific exploration of the caves began in 1884. A hundred years later, the caves were also being researched by a German team of researchers who specialise in the study of caves. The caves have been developed by the government’s tourism department who then opened it up for public viewing. 1.5 kilometers of the 3.3 kilometer long cave is open for the public while the rest of it remains shut off owing to unfavourable visiting conditions without the use of specialised gear.

The name Belum is derived from the Sanskrit word ‘belim’, meaning caves. Located in the Kurnool District of Andhra Pradesh, it is also referred to as Belum guhalu in Telugu. Evidence shows that thousands of years ago, a river passed through the caves leading to the erosion of limestone. The interaction of limestone and the water lead to the formation of dilute carbonic acid which in turn dissolved the minerals in the caves. The prolonged presence of the river, known as river Chitravati, changed its course over time and led to the formation of the labyrinth of caves.

The tourism department has created an interesting and memorable experience for inquisitive visitors. The caves are strategically lit to highlight the unique features and hues. There are a number of pathways and they are all dotted with abundant signboards to guide the visitors and ensure that one does not get lost in the spread of the caves.

There are some areas in the caves that are particularly highlighted. The Thousand Hoods section has stalactite formations that look like the open hood of the snake. There is a musical section known as the Saptasvarala guha or the cave of seven musical notes. When struck carefully with wooden instruments, stalactites produce sounds akin to the musical notes. The Simhadwaram, literally meaning the lion’s doorway, has stalactites that seem to take the shape of a lion head. Such special sights in the cave are numerous.

Archaeological evidence from the sight and Buddhist relics inside the caves shows the presence of Buddhist and Jain monks near the caves where they are believed to have meditated. The remnants of monastic settlements in the caves also date back to the pre-Buddhist era, perhaps at a time when the river Chitravari still passed through the caves. To honour the Buddhist presence at the cave, there is a pristine white Buddha stature that has been erected at the entranced of the cave, smiling down at visitors entering into a site that merges history, geography and chemistry to create stunning beauty.

A day trip from most parts of Andhra and Telanga, Belum caves promises to be an intriguing weekend getaway. Combined with Gandikota, a couple of hours away by road, its makes for a memorable overnight trip. 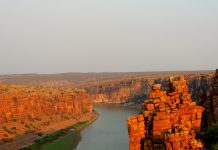 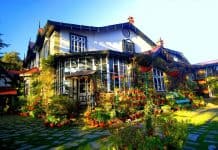 Plan a luxury stay at the best boutique hotels in India