My quest to visit an unexplored land tossed, among other countries, the young nation of New Zealand in front of me. Nestling in the cool waters of the South Pacific Ocean, it is not only zero pollution and an environmentally conscious country, but also offers many options to discover for every kind of tourist.

Consisting of two islands, North Island is commercially developed while South Island is where tourist attraction lies. My destination was Queenstown and the sight of the Remarkables Mountain range surrounding the bowl-shaped landing at the airport, from my window seat in the flight, created a feeling of euphoria. As I stepped out, a chilly draft of air enveloped me and I instinctively reached out for my jacket which nonchalantly slung over my arm all this while.

Picture postcard views
Every region in South Island is worth a visit but Queenstown takes the cake and is really the queen among them. Just around 4,500kms away from the South Pole, it enjoys a salubrious climate throughout the year. My month-long stay at Queenstown offered me the opportunity to visit nearby places at leisure and delight in nature’s splendour. Queenstown BECKONS all adventure freaks with its thrilling escapades and is also honeymooner’s paradise with its romantic locales and pleasant weather. From June to mid-September, it snows heavily when tourists from all over the world come in pursuit of skiing, snowmobiling, and other winter sports.

My inclination to indulge in my wits against nature in the snow-laden peaks of the Remarkables Mountain by taking a helicopter ride at sunset was rewarded with an aerial view of surrounding peaks cloaked in pristine white with a patch of shimmering blue water of Lake Wakatipu below. The quaint cafes along the wharf with stunning views of the placid lake and verdant hills where I spent hours were worth every second since one can sense tranquillity and peace descend here.

Adventure capital
Queenstown is the adventure capital of the world. It is here that bungee jumping originated and the daredevil in me led me to the exhilarating free fall activity. For another round of exploit, I headed to Shotover river, set amidst an awe-inspiring scenery as the effusive emerald green waters put forth a jet boat ride that zooms through rock faces almost daring to brush against you and the pilot throws in 360 degree spins at regular intervals for that adrenaline rush. Next was the thrill of skydiving – bird-like in the sky, I could sense a feeling of liberation when the parachute opened up and I slowly wafted in the wind’s direction. Coronet Peak is the skiing zone and I found enthusiasts from Australia, Europe, and even Switzerland come down during this season. Climbing Fox or Franz Joseph glaciers, skydiving, parasailing, and cross-country mobiling are some of the ‘must-do’ things while in Queenstown.

Excursions
Cruise the waters of Lake Wakatipu in Earnslaw, a 1912 Edwardian vintage steamer to reach Walter Peak, which is a huge estate of farmland where we were taken on a guided tour of Colonel’s Homestead gardens with sheep shearing demo and a remarkable sheepdog show. There, we could feed the sheep, highland cattle and deer.

En route to Milford Sound, the cruise took us through Homer’s Tunnel and Fiordland National Park. Cruising on the Tasman Sea offers pleasant sights of high Fiordland (mountains carved out by glaciers), sparkling cascades, and lush foliage. Dolphin spotting and seals lazing on the rocks added to the delight besides the prospect of tucking into an international buffet dinner on the luxury liner. Millbrook is a fine stretch of property housing hi-end resort, golf course, and fine dine restaurants.

Other places of interest
Ice Bar is a complete ice structure with captivating ice sculptures, icy sofas to sit and even the glass in which the drink is served is made of ice. Wanaka, Glenorchy, Kingston, Cromwell and more such small yet interesting towns are easily accessible from Queenstown. I spent some fun moments dealing in Queenstown’s casinos, shopped for momentoes of Pounamu (Jade) jewellery and Maori handicrafts, dug into delicious pies, and veg steaks.

I am sure no one has seen heaven or lived to tell about it. But, if there is heaven on earth, I can vouch for it and say it is Queenstown in New Zealand! 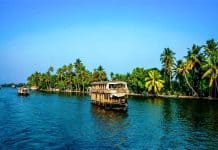 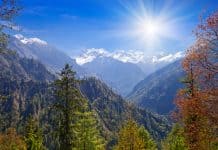 White winters in Himachal? Stuff dreams are made of